I think it would be fun to create some of the title sequences from some TV series and movies as web animations. You know the bit at the start and at the end where the credits are rolled out? That’s what I mean by title sequences.

Nowadays, title sequences add very creative and eye-catching sequences while the folks who made it get name checked! It is like bonus content!

This should be a good opportunity to boost my frontend skills.

Killing Eve is a British spy thriller television series, produced in the United Kingdom for BBC America and BBC Three. The series follows Eve Polastri, a British intelligence investigator tasked with capturing psychopathic assassin Villanelle. It has a cat and mouse intrigue to it, and it darkly comedic at times.

The title is very well crafted with big, beautiful typography and a subtle animation.

The title sequence was created by Matt Wiley for Pentagram. You can see some of the design assets in Pentagram’s portfolio.

Below is an example from an episode.

For each episode, the title changes in the following ways:

The song selection is excellent. Coincidentally, I saw in the titles that there is a Song Co-ordinator who must do this! I found myself searching for some of the featured music after watching a few different episodes!

What I want to do is to create a montage of the different variations. Every few seconds, it will randomly generate a new variation of the title sequence. The colors, the oozing blood trail, and the song will be chosen at random each time.

Here is the completed animation.

See the Pen Killing Eve by Rob (@robjoeol) on CodePen.

You can hit the mute button in the top right corner to hear the accompanying music. 🔇 It amplifies the feeling! 🎶✨

It looks like the typeface was custom-made by Matt Wiley for the TV show. It doesn’t appear to be published. So, we definitely need to search for a free alternative.

The closest match I could find is Deutschlander. It would need to be edited in a few ways to match the original typeface. We need to make a SVG (Scalable Vector Graphic) to be able to do this. What we can do is convert the title text to individual SVG paths, and then we can edit it whatever we want to.

SVG is desirable for this type of animation because it is scalable, we know everything will look good on different screen sizes without any extra work. Text can be a bit tricky to work with animations, if you want to scale it or move forward/backwards, then you can get some undesirable results.

If you’re not familiar with converting text to a path, you can do it in Inkscape by selecting the text instance, and from the main menu, selecting Path, then Object to Path (as below in the screenshot). You can do the same in most vector graphics tools. 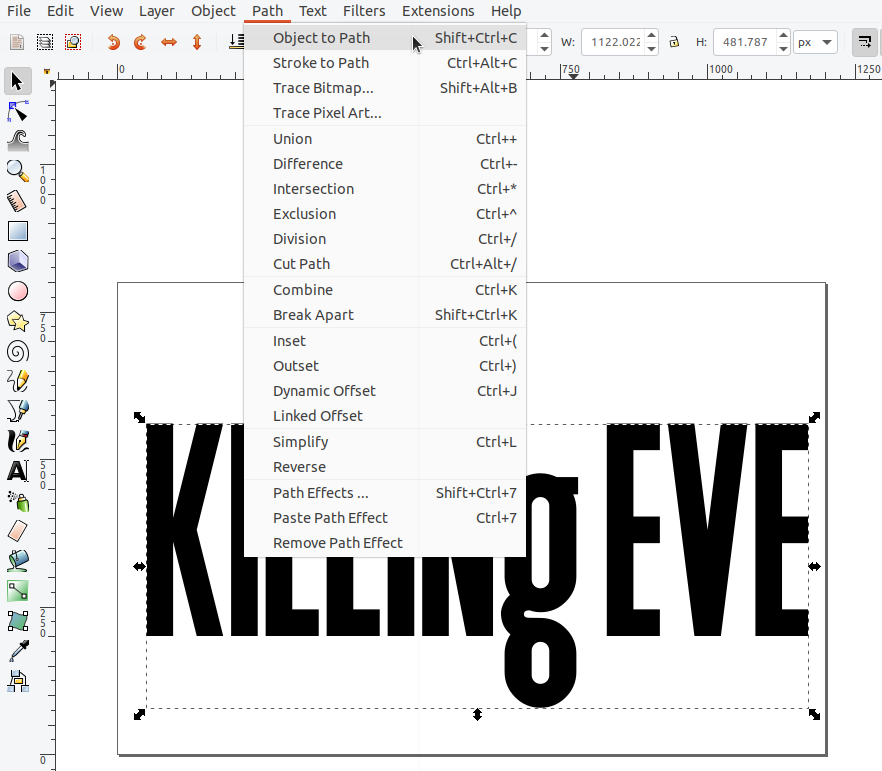 When I typed out the text “KILLING EVE”, I was surprised that the ‘g’ letter is actually lower case, while the others are all uppercase! It didn’t register with me until it was in front of my nose! It’s an unusual decision but it works well! 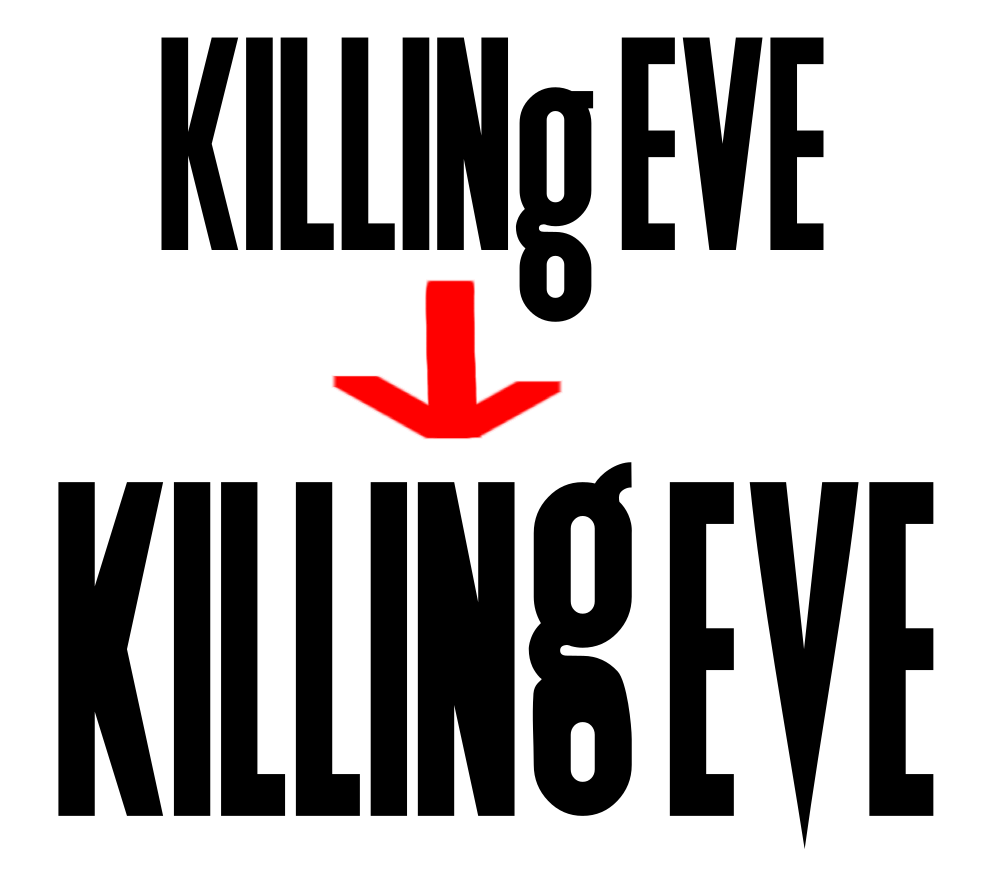 In the image above, you can see how I transformed the text. The text on top is the text that I typed out as normal. Below the red arrow, is the version I edited as a SVG path. I had to change the shape of a few letters (E, L, g, V). All of the letters needed to be made narrower and taller.

The next thing to figure out is how do we create the dripping blood trails?

Morphing the path of a letter to “cut out” and animate the blood trail is possible, but it would be complicated. There are some JavaScript libraries to help with that (such as GSAP MorphSVGPlugin), but it’s a last resort.

It’s probably easiest to overlay an instance of the blood trail over each of the chosen letters. So, we can do something like the image below. 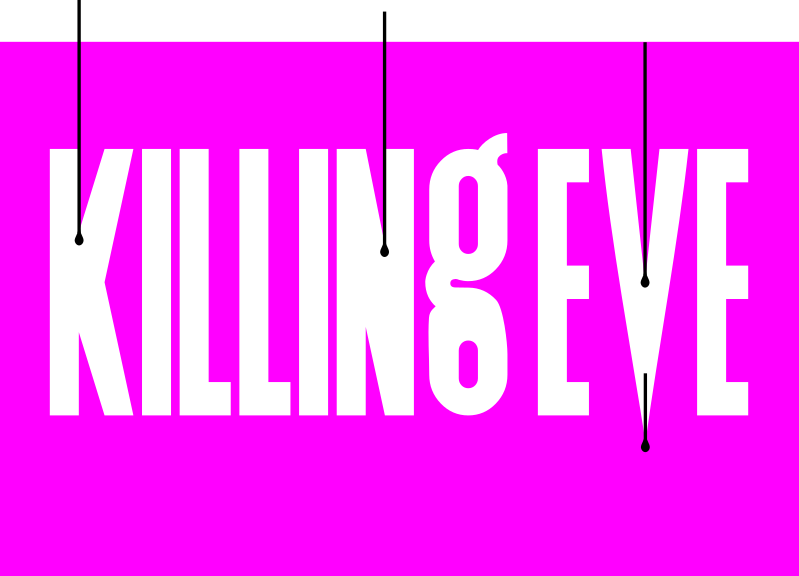 The black objects are the overlayed blood paths. We will change the fill of these to match the background colour (pink in this case) to create the effect. We just hide them until we need to animate them. There is one variation on the effect - the blood trail at the bottom of the ‘V’ matches the text colour (white in this case).

For the dripping animation, we want it to trickle slowly down. The droplet at the bottom of the trail is also gradually growing in size. So, it’s probably best we split the blood trail into 2 different paths : the trail (we can make it a rect) and the droplet. We just need to synchronise the speed of descent of both of these.

We prefer to use the transform and opacity properties for our animation as they are the most performant. 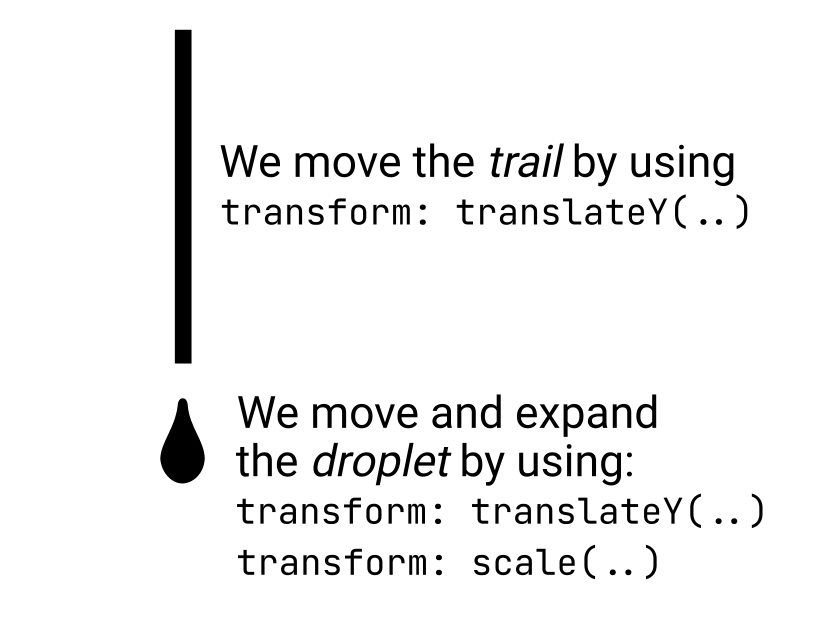 The movement for the trail is straightforward, it is a translation along the Y axis with transform: translateY(50px);. You can try out different values to see what gives you the required result.

Similarly, for the droplet we want to move it on the Y axis, but also scale it up at the same time. When we use transform: scale(1.2); to make something 20% bigger, it also reduces the amount we need to move it. So we need to reduce the amount of the Y translation to get it to match the trail.

The final bit of the animation is have the entire title (omniously) move towards the viewer. This is a translation along the Z axis. To get the amount of movement correct, we must also set the perspective on the parent element. We can use something liketransform: translateZ(100px); on the SVG, and perspective: 1100px; on the body (the parent element) to get the right effect.

That’s the thought process behind it.

There is an implication if you use JavaScript to execute an infinite looping animation like this. Most libraries use requestAnimationFrame() under the hood. When you switch tabs on a browser, if the browser finds an animation that uses requestAnimationFrame(), it will slow it down to save resources. So when you open the tab again, the animation might be in an odd state. This animation could have some ghosting of multiple blood trails for a little while before it returns to business as usual.

To prevent this tab-switching issue, you need to intervene and suspend the animation yourself when the window loses focus.

The source code is available in this github repo. I will create more title sequences soon and add them to the repo also.

Also, you can check them all out in this codepen collection.

I learned a bit more about GSAP:

This is end, for now! Watch this space for more title sequences!

Also, if you’re a fan of The Queen’s Gambit, I found this interview with the designer behind the title sequences an interesting read. I have added some of them to my TODO list!

I hope you enjoyed this short walk-through.