XKCD is probably the most popular webcomic with Devs. It only seems right that you can read it from the comfort of your terminal via a xkcd command. How can we pull that off?

I use Kitty as my terminal of choice. It is fast, feature-rich, and is cross-platform (Linux and macOS). The real game-changer is that it is one of the few terminal emulators that uses GPU rendering, and has its own graphics protocol for displaying images. So, out of the box Kitty can show images (with a caveat), why not put this capability to use?

Run xkcd to fetch the latest comic; or xkcd -r for a random selection.

Read on if you’d like to understand the finer details!

Displaying images in the terminal

Kitty shows images via the icat kitten which is included in the default installation. A kitten is a python script to extend the functionality of Kitty.

To display an image named img.png, you can run the following command in Kitty:

There is a caveat that ImageMagick must be installed for icat to work. I had it installed already, so everything worked first time for me! It supports all image types supported by ImageMagick.

I believe iTerm2 has similar functionality with its imgcat script.

If you want to use another terminal emulator, maybe you can use a python library called Überzug to achieve the same outcome. Or you could pass the image off to one of the image viewer utilities, feh and sxiv, but they will always open a new terminal window AFAIK.

Personally, I prefer to have the comic shown as an image in the same terminal window, and Kitty does exactly that. So, it was a no-brainer for me!

You should not need to install anything else if you have a *nix machine or have cygwin installed on Windows (its installed with Git usually). With the GNU coreutils: curl, grep, and cut, we should be able to get the latest webcomic from the XKCD homepage. 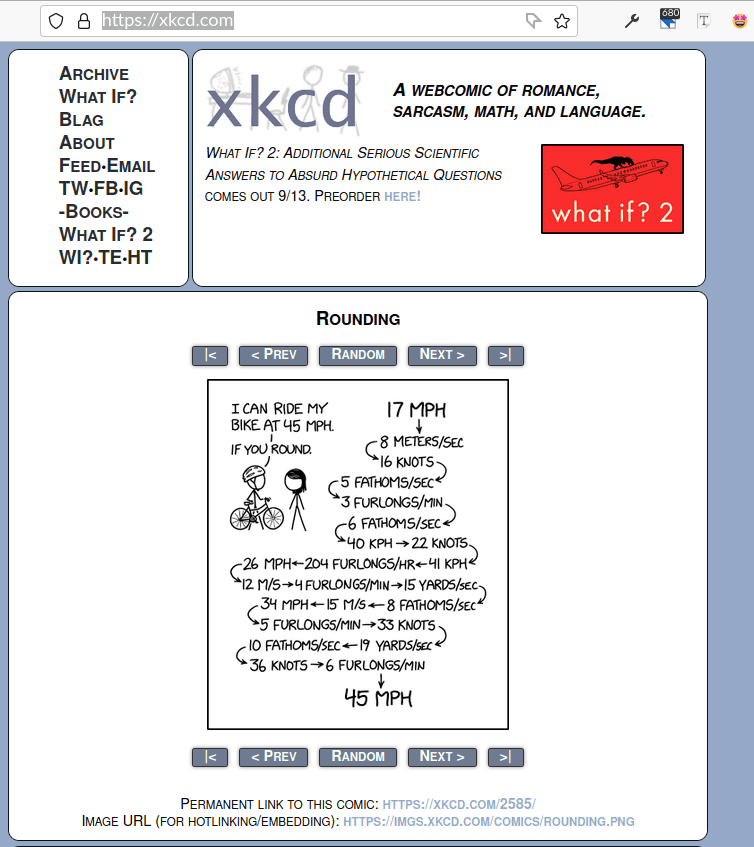 It would be nice to be able to read a random XKCD also. Is there a way to do this from the XKCD website?

We are in luck because the XKCD website has a Random page where they fetch a random comic from their archive for you! So, we should be the able to do the same thing with the random page and home page!

To grab the homepage, we use curl with the “-s” flag (to run in silent mode - so there is no progress meter or error messages):

We can use grep to pick out the URL of the image of the webcomic. The webpage is quite short, so we won’t have to write anything too gnarly. We just want to uniquely identify the image URL with the simplest regex (regular expression) possible. On inspection of the HTML, it looks like this snippet is the easiest to target:

There is an extra space after the equals sign for the href attribute (oddly). If we target the href attribute with the beginning of the URL, we will will get this as the only result. The regex 'href= "https://imgs.xkcd.com/comics.*' should do the trick. We pipe the output of the curl command to the grep command and get the snippet we are after.

Next, we want to get the URL on its own. We can use cut to strip out the unwanted parts of this string using the angled brackets as a delimiter. Using cut -d'>' -f2 on the output gives us “https://imgs.xkcd.com/comics/rounding.png</a”, if we pipe this output to cut -d'<' -f1, we get the URL on its own!

So, as a single line command, we can run the following the latest webcomic: 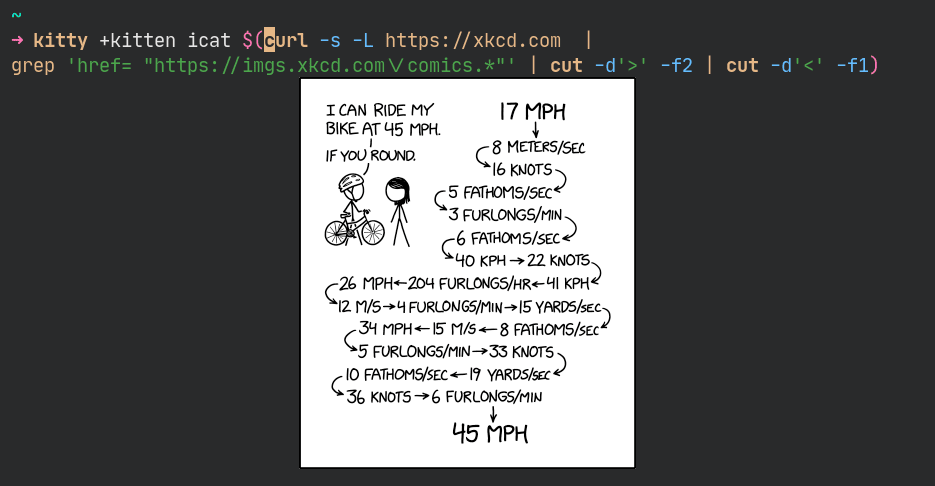 Let’s tidy the script up to make it more readable, and add the ability to choose a random comic with a -r flag.

If there is a “-r” argument passed as the first parameter to the script, we will fetch the page https://c.xkcd.com/random/comic instead of the homepage. Since this URL will redirect you to another page, we need to adjust our curl command to follow this redirect. We can do this by adding the “-L” flag. And that’s it, the rest of the logic is the same for getting the correct image from the fetched page.

This is our final script, which we put in a file named “xkcd”:

Now, to get a random comic, we can run xkcd -r.

You got to love the power of bash scripting for this type of task. Our basic functionality can be achieved with a single-line command, and in less than a dozen lines, we have made a tidy script for reading our favourite comic on the command-line. 🤓